So what's up with the Google-licenses

Last weeks, we hear all kinds of stories on the Google-license, so let's have a closer look.

Google already has a license since 2007
Most people forget this, but the earliest register entry for Google dates back to 2007 for E-money, and was handed out to Google Payment Limited in London. I blogged about it then, and since then we could see a Google Wallet in the works, Google bucks. The register of the FCA/FSA still has the entry here, demonstrating that it was effective until 19/5/2011. The brand name in the register is for Google-checkout.

Passporting
Then from 19/5/2011 onwards there is the next register entry (with the register later being handed over to FCA by 31st of March 2013). The register entry is still for e-money with passports to other countries. These passports date from 18-5-2011 as our Dutch e-money register shows and the firm is also licensed to perform payments under the PSD1 definition. Offering additional PSD2 services is not part of this license.


Brexit coming: seek refuge
Now, with the Brexit coming up, there is of course the question how to manage future uncertainty. Many players have been trying to solve the puzzle and my assumption is that the recent moves towards Lithuania and Ireland are Brexit-related. Lithuania is quickly becoming a hot spot for e-money licenses and taking over the dominant role of London in this respect. The license there will allow Google to continue operating in the e-money and payments domain and also offer Payment Initiation and Payment account services.  This makes Google Brexit-proof and PSD2-proof.

Also, we should note that Lithuania does a nice job in offering a digital form of license as well. Have a look at it over here. 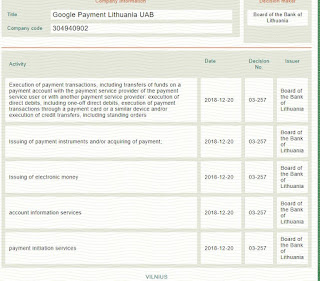 When checking the Dutch register, I noted that there is no passport for the Lithuanian entry, but still the UK one. I expect however that the new passporting will become effective in a couple of months, so Google can continue its operations in the EU, now under the Lithuanian passport rather then the UK passport.

As for Ireland, the license is limited to issuing payment instruments and accepting payment transactions, which would point to the fact that Ireland may be the corporate base that also has a role in shaping the future payments infrastructure for Google. It also suits the concept of PSD2 that one has to get the license in the country where it is also used.

Conclusion
Google is since many years in the payments domain and treading carefully, applying different concepts and such. They made themselves Brexit and PSD2-proof by moving to Lithuania (where they are still wating for the passport procedures to finalise) and created additional future business flexibility by applying for payments issuing/transaction acquiring in Ireland.
Posted by Simon Lelieveldt at 4:37 pm