It's about five years ago that I discovered, by accident and curiosity, that Google Payments Limited had applied for an e-money license at the FSA. Ever since, people have been wondering how Google would enter the payment space. Would they offer a wallet with virtual cards or would they issue their own new virtual worldwide currency (googles, googlets or gees)?

In good tradition, Google started out doing field tests with the wallet (which would sit in the mobile phone) and announced this in May 2011. The wallet was to contain your credit-card cards as well as a google-pre-paid card. And payment was possible with Paypass while the wallet would also facilitate the savings of loyalty-points. The card information was stored in the Secure-SIM-element in the phone and they experimented quite a bit since then.

So where do we stand now?

Well, the Google Wallet is now being rolled out and the Google development team sent out this video to further explain the wallet concept and roll-out. The most important change is that they decided to move the card-information to the cloud. This allows the Wallet to be used both via Phone and via the Web, with all your card details and important digital documents (ID's, transit pass etc) residing in a safe digital environment. So their distribution model for the application is now changing to making APIs available so that merchants and issuers can easily integrate the Wallet in their site/services.

As such, we can thus see Google moving into an integrators role, rather than a payment instrument issuer role. In fact, at some point in time, the company thought about issuing Google Bucks, according to Eric Schmidt, but abandoned the plan. The concept would consist of a “peer-to-peer” money system by which users seamlessly transfer cash to each other via a hypothetical application. However, various laws about currency and money laundering in different parts of the world made this too complicated to realize.

For now, the peer to peer payments in the Google Wallet are no longer on the agenda. And from a historical perspective (see my other blog) I think it is a good choice. Yet.... one of the developers did mention on this subject: it's impossible for now, but stay tuned for some announcements in the future.

So, are we still in for a surprise here?
Posted by Simon Lelieveldt at 5:17 pm

As you may know I am somewhat sceptic about the underpinnings of Bitcoin (see my previous posts), but the system does keep innovation going. Bit-instant for example is a company that helps consumers convert money into bitcoin and vice-versa. And such services are surely helpful in bringing more reach to the system.

Bit-instant is apparently now planning to bring a debit-card on the market, in two months time, that marries the bitcoin and money world even more. In this article here you can find a link to an IRC chat with Bit-instant, in which it announces its plans. It also provides a link to the picture of the card, showing a QR code that can be used to quickly deposit bitcoins residing in other applications to the card-account. 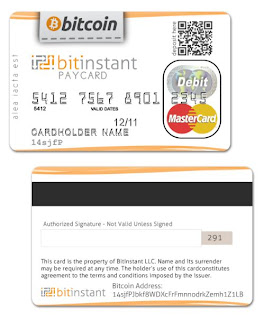 Now as I understand it, it is a regular worldwide ATM/Payment card. And it looks like it allows bitcoin to be deposited on the card balance. But essentially the bitcoin holder can ask Bit-instant for a conversion of some bitcoins to money and this money will then be deposited on the card balance for payment. By also printing the bitcoin identification on the card the concept very much looks like bitcoin is entering the card-market. And certainly to the user it will feel/look that he can pay with his own minted bitcoins.

In reality this is a very smart introduction of just another card in the market. It's a variation of the regular co-branded card where now we don't see a soccer club, automobile club, but the bitcoin club appearing. Still, it's another innovation worth exploring, so let's see where this card will take us.

Posted by Simon Lelieveldt at 10:25 am

Email ThisBlogThis!Share to TwitterShare to FacebookShare to Pinterest
Labels: bitcoin, cash (and kicking it out), innovation, regulation 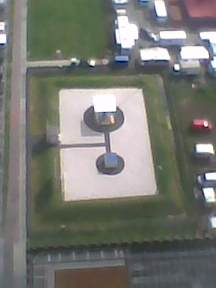 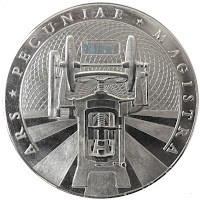