Costs of fraud by phishing at banks doubles in 2011

The Dutch Bankers Association today starts a campaign to increase awareness of consumers that they shouldn't fall for the numerous phishing mails that flood their inbox. The reason is the fraudnumbers in banking. After the first half year of 2011, the fraud by onlinebanking had already succeeded that fraud over 2010 (9 million euro). And similarly, the number of phishing incidents in this first half year amounted to 2418 while over the whole year 2010 this number was 1383.

The NVB has also renewed the website VeiligBankieren.NL; a website that I personally helped come into existence in 2005, as it was clear that awareness on the risks of e-banking required timely communication. This still is the case and thus the campaign/trailer below was developed. It will air extensively the coming days. The commercial shows the physical equivalent of phishing and warns consumers not to open fake-mail from their bank.

Posted by Simon Lelieveldt at 12:12 pm

As some of you may know, I have had quite an interest in electronic money in the Netherlands in the past. And yesterday I had the pleasure of visiting the conference on e-money by Finnius. The conference was concise and clear with talks by Andries Doets on the regulation and a speech by the supervisor (DNB: De Nederlandsche Bank). This provided a good overview of rules, exemptions and clarified the role of DNB.

After the beautiful and energizing musical break (Duo Sottovoce) Casper Riekerk moderated a discussion that focussed on business models and the difference between paper-based and digital electronic money. The panel and audience agreed that the margins in the e-money/payments business are quite slim, certainly given the rule that the float cannot be used for other purposes (which happened when giftcards where still paper-based).

At the end, following a suggestion by DNB, the thought of setting up a representative organisation for e-money issuers in the Netherlands came up once again. So perhaps we will see a new organisation emerging as a result of this conference. Time will tell.

Personally I couldn't help thinking that quite a lot of effort by the supervisor is spent on values and amounts of e-money that are irrelevant, compared to the busloads of similar-type payments via mobile phones and Ov-chipcard (exempted from regulation). It is clear that both market and supervisors have digested and codified this exemption into their rules/system. So no one questions it (if anyone still remembers the history of this exemption).

But it remains a paradox for someone like me, who witnessed and joined the discussions on e-money dating from the rise of e-cash and Mondex. It was in particular the digital forms of pre-paid e-money that raised the awareness and need for legislation on e-money. Everyone got a head-ache when they thought of a situation in which money (and goods) were digital. Because this would create a situation in which central banks in the end will not know any more how much money is in circulation. And consumers might see their digital cash disappear if it was not secured properly.

So the headache lead to the legislation on e-money. And when introduced, supervisors decided to create an exemption for precisely that form of money that made us develop the legislation in the first place.

As such I think the whole e-money debate is quite an interesting casebook example of the Politics of the European Union.
Posted by Simon Lelieveldt at 10:14 am

Today, our central bank, De Nederlandsche Bank (DNB) released survey results on Dutch payments in 2010. It showed that in 2010 consumers in the Netherlands made 4.4 billion cash payments at checkouts (shops, cafés and restaurants, petrol stations and at markets) and some 672 million between persons. So this creates an interesting benchmark for anyone doing studies on payments. If you wish to estimate the number of p2p payments in a country, just take about 16 % of the total cash transactions (but remain aware of cultural differences though...).

The study (only available in Dutch: here) also reveals that most Dutch consumers pay with the payment product that they prefer. So it appears as if everyone in the Netherlands is quite happy with the way we pay. Yet we should note that the scope of the study was limited to the classical payment products. Consumers weren't asked about their preference for strippenkaart, the payment means for public transport:

I would bet that when asked, many would prefer to continue using the strippenkaart over the OV-chipcard with its cumbersome operational flaws and failures. But as of today consumers have no choice, because the strippenkaart has been taken out of circulation. Paper tickets are now only available in trains but the National Railways are planning to scrap these at the end of 2012.
Posted by Simon Lelieveldt at 3:37 pm

Email ThisBlogThis!Share to TwitterShare to FacebookShare to Pinterest
Labels: cash (and kicking it out), cost+benefits, efficiency, history, research and reports

The cultural side of payments: Hofstede provides an interesting picture

One month ago I had a meeting with two American visitors that wished to know more about the history of payments here in the Netherlands. And as they had just arrived and had no time for the Walking tour on the history of Dutch payments we discussed those topics over a cup of coffee and lunch. And of course we came to discuss the Why-question. Why is it that the Dutch seem to be more keen on cooperating in the area of payments than other countries?

Of course there are a number of historical reasons. And one might argue that the Dutch are of a more cooperative nature given that they have to battle the water cooperatively, but it's hard to substantiate this. But then I realized that Geert Hofstede had done quite some work differences between cultures. And the funny thing is: if you chart his data, you can indeed see that the Dutch score high on uncertainty avoidance, long term orientation and low on masculinity and power distance. 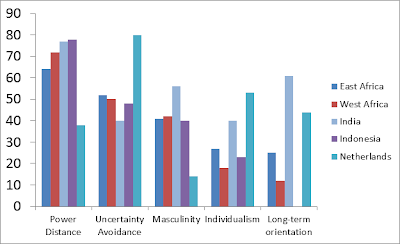 So there you have it. The reflection of our cultural mindset that stimulates us to choose cooperative solutions when developing and organizing payment methods and systems. This is not to say that everything is and was collective here in the Netherlands. But in the long run there is a strong tendency to cooperate on standards.
Posted by Simon Lelieveldt at 11:32 am